Time: 2017-09-11  Click: 1052
Why don't make money: since the 21st century, the knitting dyeing and finishing industry in our country has come into the fastest growing period in its history with the growing demand for knitwear in domestic and foreign market, the annual processing capacity exceed ten million tons and is in the first place of the world. Due to the introduction of advanced equipment and technology, dyeing and finishing process and technology level has been improved significantly compared with the past, but in the face of more intense competition in the market and the increasingly stringent environmental requirements, there are some obvious aspects in the existing dyeing and finishing technical level that does not adapt to the development of the situation, but compared with international advanced level, there still exists big difference.

Dyeing and finishing technological level is the key link of the knitted product quality and grades, it is also the most important mark for the energy conservation and emissions reduction, the only way forward for the sustainable development of the entire knitting industry will be the research and improvement of the total dyeing and finishing process.

The present situation of dyeing and finishing technology of knitted fabric in China.

(1) Sub oxygen bleaching process
At present there is only a dozen dyeing factories in Shandong province that are still using sodium chlorite bleaching technology, processing cotton elastic rib, cotton wool (double-sided tissue) underwear products. Products of the sodium chlorite peroxide bleach looks white, has a good elasticity, the grey fabric has less weight loss, in recent years, the equipment has changed from the tank to the titanium plate overflow machine, with type 0, and type L, compared with the tank type machines, the grey fabric and bleaching liquid have a high ratio of exchange, short bleaching time, this reduce the occurrence of crease due to pile pressure on the interior of the tank.

But since the Cl02 in the sodium chlorite bleaching process is toxic, corrosion to equipment, has air pollution, harmful to human health, unable to process the product containing spandex and other issues, this do not belongs to the clean production and thus has long been eliminated at abroad, its production has also been shrinking year after year at home.

(2) Normal temperature overflow bleaching machine technology
Normal temperature overflow bleaching machine technology has a history of more than 30 years, because oxygen bleaching is in the boiling point, dyeing machine is not sealed, a large amount of heat and H202 decomposition is fading away in the workshop in the form of heat of vaporization, huge steam heat loss, long process time, leading to large energy consumption. The process use the unification of caustic soda, scouring and bleaching, caustic soda can remove grease and wax from cotton fibers, make the fabric feel thick and hard, and with a high rate of weightlessness rate, which is generally between 5% and 8%. Calculate yearly with a 8 million t cotton fabric processing, the weight loss is between 400,000 and 640,000 t, which is huge waste. Therefore controlling the loss rate of bleaching is the urgent task of process improvement, and it will have a great social benefit.

At the same time, caustic soda can play the catalyst role in the oxygen's damage to the fiber strength, to bring down the grey fabric's strength. When oxygen bleaching, the unevenness absorption of the alkali will lead to the dyeing defect in the next process. In addition, caustic soda bleaching is difficult to wash, washing more times, causing large water consumption, with high COD in the waste water, the sewage treatment is difficult, the fabrics containing spandex, viscose and other fiber should not be treated with caustic soda. Therefore, the pretreatment process of knitted fabric should be improved to the oxygen-free process without caustic soda. 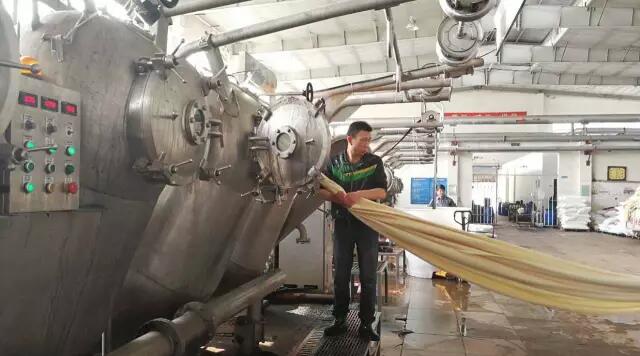 (3) Rapid oxygen bleaching process without caustic soda
In the end of the 20th century, a foreign auxiliary enterprises in Shandong province introduced a compound rapid oxygen bleaching agent that containing no caustic soda from European head office, in the application of the oxygen bleaching technology such as knitted fabric, bobbin, etc. It's good in whiteness, less weight loss (2.5% ~ 3.6%), easy to clean, even dye ability, suitable for high temperature drift and a variety of fiber oxygen bleaching. This reagent has been widely used and promoted for several years, from the Pearl River delta, the Southeast Coast, the Yangtze River delta to the knitting dyeing factory and bobbin mills of the Shandong Peninsula, Liaoning Peninsula, it is in heavy use.

(4) Pretreatment process of biological enzyme
The use of biological enzymes mainly refers to the cooking process of pectinase, which has been promoted. Using pectinase under the condition of 50-60 ℃, pH 4.5 ~ 5.5 to process cotton can remove the pectin substance, improve the capillary effect, and it will cause low potential damage to cotton. After enzyme scouring and then to oxygen bleaching, the weightlessness rate is less than the alkali oxygen process, some dark products such as navy blue, black can be directly dyed after scoured with pectinase, the fabrics feels soft, thick and with small shrinkage. Compared with the alkali oxygen process, the pretreatment process of biological enzyme can reduce the water and steam consumption, which is a clean production process that is been vigorously promoted.

(5) Continuous pretreatment process
The continuous pretreatment process has the three forms of processing type, they are rope, cylinder and slitting open width. The cylinder open width introduced by a manufacturer in Zhejiang from German ERBATECH GMBH company has been put into production and the slitting open width is also put into production in Guangdong province, and the same kind of equipment has been produced in China as experiment. Cloth made by continuous pretreatment process is good in quality and cloth is very flat without fine wrinkles, sanding, bias filling, etc., the enrire machine is equipped with automatic feeding, process parameters online monitoring equipment, with good reproducibility craft, less water consumption (water consumption of per ton cloth is 1:8 - 1:10), (steam consumption of per ton cloth is 1:0.8), high production efficiency (shift production per capita can reach 6 ~ 8 t). 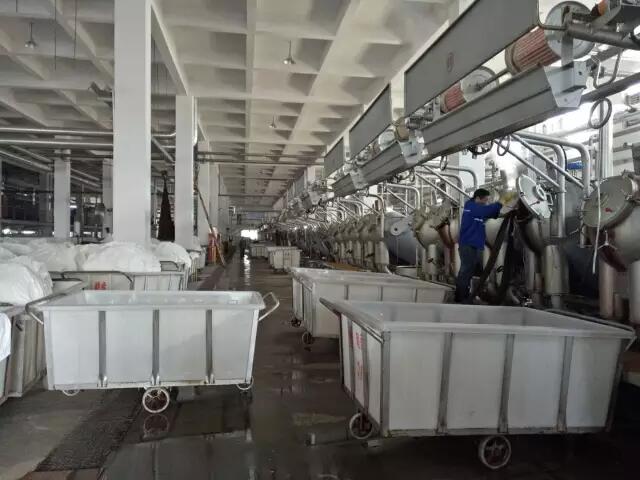 At present, there's only a few companies is still using this production line in domestic, but with the constant improvement of equipment and the reducing of the cost, it will be the trend of future development of pretreatment process, particularly when it is used together with open-width singeing, mercerizing, open-width cold heap, open-width printing, open-width dyeing finishing, the product and enterprise's competitiveness can be significantly improved.